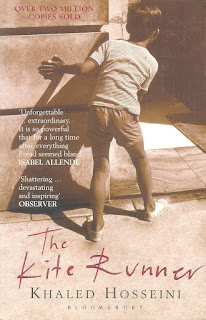 The Kite Runner by Khaled Hosseini

Afghanistan, 1975: Twelve-year-old Amir is desperate to win the local kite-fighting tournament and his loyal friend Hassan promises to help him. But neither of the boys can foresee what will happen to Hassan that afternoon, an event that is to shatter their lives. After the Russians invade and the family is forced to flee to America, Amir realises that one day he must return to Afghanistan under Taliban rule to find the one thing that his new world cannot grant him: redemption.

I was fully expecting this book to break to my heart, and it absolutely did. Hosseini really evokes your emotions with his writing, as I'd learned from A Thousand Splendid Suns; he is a master storyteller. This book is both haunting and beautiful; one which stays with you.

What I loved most about the novel was the learning curve. I love reading books about different cultures, about things I have little to no knowledge of. Hosseini taught me the different social constructs of Kabul, the customs, manners, and rituals. The novel is initially set in pre-war Afghanistan, and later shows us the country once it's infested by the Taliban. It's very easy to take a step back from war if your country isn't involved; Hosseini showed me exactly how a country can fall to pieces in wartime under a regime. It's shameful how we can detach ourselves so cruelly from tragedies that don't affect us.

The narrator, Amir, isn't much of a likeable character. I'm still unsure as to why this is a good thing or not. The novel begins when he is a child; he's weak, cruel, and a coward, and he knows it. The journey the novel takes him on finally allows him to redeem himself, however it really is a long time coming, and in parts I thought he wasn't going to make it. He remained selfish even into his adult years, and I did worry he wouldn't prove himself to me. I sometimes wondered whether Hosseini liked Amir as a person.

I found the characterisation to be good, albeit interesting. The characters seemed one-dimensional to begin with; Hosseini didn't give us their stories straight away. As the book progressed, we are given more to work with, and things being to fall into place.

Hosseini's plot gives us a great deal of clichés and coincidences that just seem entirely far-fetched. This seems to have attracted a lot of negative reviews for the novel in the past. I didn't mind them too much, and still managed to enjoy the story, although plot points did seem conveniently placed.

I may be in the minority, however I definitely preferred A Thousand Splendid Suns. There was a lack of female characters in The Kite Runner, and where they did appear, Hosseini didn't seem to write them as well as he could have. Each of them seemed wishy-washy and distant; miles away from the women in his next novel.

I'd definitely recommend both of Hosseini's novels to anyone. I think there's a real need to read about different cultures, and Hosseini taught me some good lessons here. The Kite Runner is all about the balance between justice and mercy, how we pick ourselves up out of the gutter of guilt and shame, and the importance of understanding both the love and hate we feel for those we consider family.