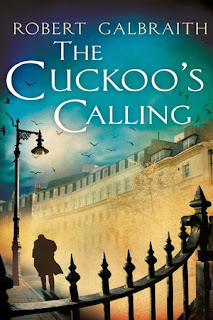 The Cuckoo's Calling by Robert Galbraith

When a troubled model falls to her death from a snow-covered Mayfair balcony, it is assumed that she has committed suicide. However, her brother has his doubts, and calls in private investigator Cormoran Strike to look into the case.
Strike is a war veteran - wounded both physically and psychologically - and his life is in disarray. The case gives him a financial lifeline, but it comes at a personal cost: the more he delves into the young model's complex world, the darker things get - and the closer he gets to terrible danger.

So this is the  novel by the famous Robert Galbraith; the man who's actually a woman. I'd love to say I'd have picked this book up if it hadn't been revealed the author was in fact none other than demigod JK Rowling, but it just wouldn't have been the case. I do enjoy the odd crime novel, but I tend to find them predictable and unchallenging. Now, I am biased, but I couldn't predict a thing here. This novel is absolutely no Potter, but you all seem to have forgotten how well Rowling can weave a mystery.

For me, a mystery is all about how easy it is to work out. Crime authors pepper their pages with little clues for their readers, leading them to build their own conclusions surrounding the whole whodunit. Nine times out of ten, they give themselves away while there's still a chunk of the story to go, and each turn of the page is then confirmation that the reader has guessed correctly. And don't get me wrong, this happened here. I interpreted each of Rowling's clues to find my killer, and patiently turned the rest of the pages, each time having my suspicions confirmed. The thing is, I was completely wrong. I had been led down the garden path with a load of red herrings, smoke, mirrors, and excellent writing. If jaws actually hit floors, I'd have no teeth left. The shock was incredible. "She's done it again!" I screamed to no one in particular.

I liked Rowling's explorations of social class; similar to those in The Casual Vacancy, but this time a lot more focused on wealth and seriously high society. She explores those blurry worlds of celebrities, and the media, and lets us into their seedy little worlds. Not only this, she exposes the reality of these worlds, and adds layers of substance and vulnerability to the people who live in them.

This book is wonderful. I was at work twitching to get home and read more; I was out with friends, wishing I wasn't; I was starved for it. It's intriguing, exciting, and very real. It's just a shame Rowling's secret was given away by a friend. I hope it doesn't put her off continuing the series, and part of me is glad the secret is out; I'd never have picked this up otherwise.

(Although I am biased and can't say a bad word against again, my unpopular opinion is that I preferred The Casual Vacancy. Am I the only one?)