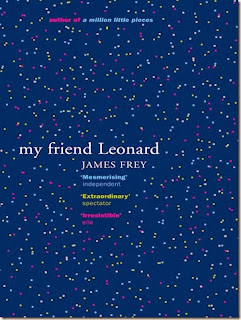 My Friend Leonard by James Frey


While in rehab, James Frey finds a father figure in a shady mafia boss called Leonard. When Leonard returns to his dubious, prosperous life in the criminal underworld of Las Vegas, he promises James his support on the outside. Tragedy strikes the day James is released and his world seems set to implode. Unsure where to turn, he calls Leonard. Paradoxically, it is in Leonard's lawless underworld that James discovers the courage and humanity needed to rebuild his life.

I really wanted to hate this book. I was fully prepared to hate this book. After reading the entirety of A Million Little Pieces, taking it in as a memoir, and loving every minute of it, only to find out the majority of the story was sheer fiction, I had trust issues with James Frey. This time, though, I was prepared. I knew it was highly unlikely that this book would be all truth. I had absolutely no thoughts in my head that this is was in any way an account of Frey's life. I took the story in as fiction, and it was absolutely wonderful. It made me smile like a loon, it made me cry my eyes out (which isn't as easy as you might think), and I really enjoyed the story.

Frey's writing is unorthodox, and frantic. The sentences move in a stream of conciousness, as though they were the thoughts in his head, and this really hammers home the paranoia and the issues involved in being a recovering addict. It's all very raw, emotional, and captivating. The tragedy James goes through, and the despair that comes with it, is shown in great depth in just the words he uses. The way James narrates changes gradually over the course of the book, along with his feelings, and the changes in his life. The writing style grows and evolves with the narrator, and that's something that I find really remarkable.

What I loved most is that the story tells of the power of love and relations in the healing process. James had his friend Leonard to help him through the difficult times. Yes, I imagine having a very wealthy crime boss helping you out in times of need would be very beneficial, however Leonard was a wonderful character. He was full of love and wisdom, and I can't imagine anyone reading the book disliking him. The book seems to be more of a tribute to Leonard than anything else.

I'd encourage you all to read A Million Little Pieces before getting into this one. It will explain a lot about the place James is in at the beginning of the novel, and the relationships within the book. This isn't as painful as Pieces; it's filled with more hope, which is never a bad thing. I'd say pick it up for the writing style alone; it really is wonderful.
Posted by JK at 11:49