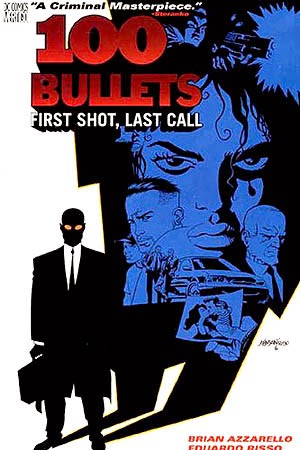 The mysterious Agent Graves approaches ordinary citizens and gives them an opportunity to exact revenge on a person that has wronged them. Offering his clients an attaché case containing proof of the deed and a gun, he guarantees his "clients" full immunity for all of their actions, including murder.

This is a morality piece - if you could kill the person who destroyed your life, no strings attached, would you? We are presented here with two entirely flawed characters who are given this choice, and we watch them struggle with their decision before they finally come to it. We then see the consequences of their actions unfold.

The premise of the plot is good, and it's pretty interesting. This volume read like two short stories rolled up together, and although the assumption is that the second story will play out similar to the first, this isn't quite the case. It's difficult to understand the direction the story is taking, however. Going through an identity parade of characters in this way will become totally repetitive, so I'm excited to see what the next volumes bring.

Characterisation was sparse, simply because Azzarello had limited time to explore the lives of the two characters. Agent Graves seems to be the only static character so far, and it'll be interesting to see if he is explored in any real depth going forwards.

I'm really starting to appreciate these tough, noir-like comics. The art here is good, and although pretty cartoon-like in places, does a good job to portray the bleak lives of the pair who are offered the gun. The scenes were dynamic, merging into one another, and not strictly following traditional panelling rules. This added suspense in the right places, and helped a great deal with pace and tone.

Volume one didn't make as big an impression on me than I'd be expecting, so my hopes are entirely and irrevocably pinned on volume two.