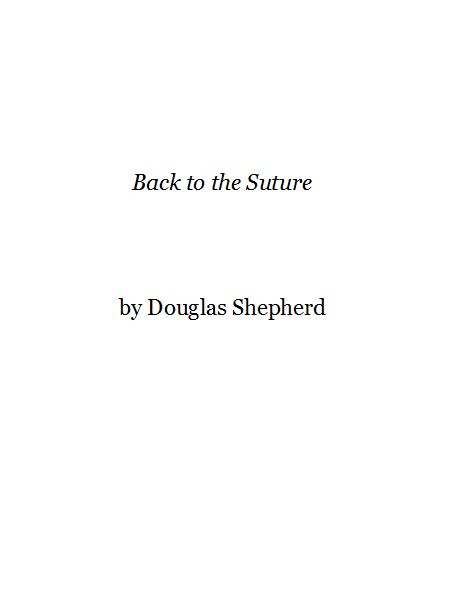 Back to the Suture by Douglas Shepherd

Dr Stringer Christian is a down on his luck medical professional who accidentally travels back in time to the 1970s. He finds himself fourteen years old again, and is allowed to live his life again in the 'simpler' days - trying to make a few life-saving changes along the way.

I really enjoy a good time travel story. There's just something so fascinating about the concept - the possibilities of changing the course of time are endless, and the chances you could have to stop tragedies would be too huge to give up. Stringer has these choices as he's launched back in time, and he makes his attempts to alter the course of history for many in his life - whether it's a boy from school he barely knew who dies from skin cancer, or the deaths of his mother and brother. In a true to life manner, he's unable to succeed for everyone, however he does manage to go back to a better present day life than he had left.

The novel is steeped in nostalgia.  We're taken back to a time where not everyone had a landline telephone, never mind a mobile. We're treated to in depth commentaries of the different brands people bought in the 70s, the music, the television programmes, and best of all, the way people were. Stringer makes sound comments on the differences between that time and ours, never once suggesting that the present day, despite our technologies, is in any way superior.

All of the characters in the novel were entirely loveable, even the alcoholic doctor who is Stringer's father's medical partner. They have a very real feel to them, and they show a real sense of family and community values, which seems to be a hint to relationships in the 1970s.

A quaint journey down memory lane, with a good few twists, turns, and surprises, this is a good one for astute time travellers and anyone who was young in the 70s.
Posted by JK at 12:11