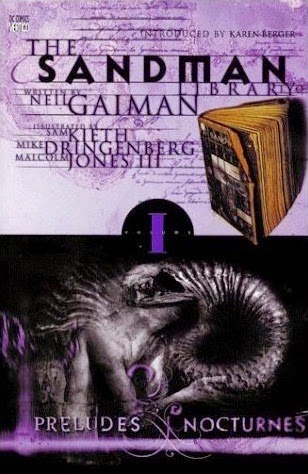 In 1916, Dream is captured and encased in a glass globe in a failed attempt by an Edwardian magician to bind Death and attain immortality. Dream bides his time for decades until he finally escapes. We then join Dream on his quest to recover his totems of power, which were dispersed following his capture: a pouch of sand, a helm and a ruby.

The beginning of Dream's story is utterly compelling. Here we have a mysterious enigma, the lord of imagination, captured and contained for decades by a power-hungry magician. We see the world struggle in sleep, unable to hope or dream as usual. Upon his escape, we see the extent of his power whilst he tracks down his three essential amulets, but are reminded he is still weak without them. Gaiman characterises Dream as a member of the family of the Endless, and lets us meet his sister, Death, in the final issue, after alluding to the others throughout volume one. Dream reminds Death he was captured by accident, and the trap had been set for her.

The art is incredible, with  heavy emphasis on the horror theme. The colours are quite garish, which adds to the impact of the gory imagery. I felt as though I was going to be sick over a few of the more macabre pages.

I was really surprised to see some familiar characters and monuments from the DC universe. We meet the Scarecrow and Doctor Destiny in Arkham Asylum, and John Constantine appears for a brief spell to help Dream locate one of totems. This being my first read of Sandman, it felt odd that this world wasn't self-contained, that it shared a universe with Batman. Dream's world and story seems far more mystical and supernatural than this. It jangled me.

I've heard (from friends and also by Gaiman's own admission) that volume one isn't the strongest installment in the series. I enjoyed it, but came away with an unerring feeling of confusion. It's clear Dream has a long road ahead of him, so I look forward to volume two.
Posted by JK at 13:03