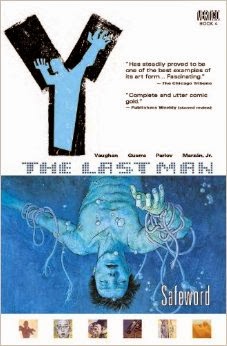 In the care of a fellow Culper Ring member, Yorick Brown is forced to confront his tremendous feelings of survivor guilt that lead him to constantly put his life in danger. Once on the road again, the group runs up against a literal roadblock in Arizona, where the female remains of the Sons of Arizona militia have cut the interstate to keep out any vestiges of the U.S. government.

In my review of the previous installment, I lamented that I was only continuing with this series because I had a desire to see what happened. and that I really wanted to love it. Unfortunately, both seeing this through to the end and Yorick's fate are not high on my priority list after this volume.

This one wasn't even as strong as the previous three volumes, with lots of recurring events. The trio run into trouble, get involved in violence, narrowly escape, meet some woman who wants to fuck the last man on earth, etc. Very static. I'm bored of the plot, bored of the characters, and apparently the phrase "not if you were the last man on earth" means nothing to Vaughn's 'feminist' characters.

As an apparent feminist comic, Vaughn continues to fail, portraying the majority of women as feminazis, and having them comment that another must be PMSing because she had a shouty moment. No other plausible explanation for feminine anger, so it must be her period.

Yorick still has no personality, and it transpires here that he has some sort of survivor guilt which is why he keeps jumping in front of gun-toting hordes, so why anyone would want to fuck him is beyond me.

I also have absolutely no concept of how much time has passed with each volume. One character made a comment that they'd been trying to get to California for eighteen months. Oh, okay.

Persevering with another two volumes as a very trusted friend has let me borrow them, but I'm starting to think this really isn't my thing. I've just ended this one on the "Oh shit, Hero's turned up" cliffhanger, which has been used for what feels like the fourth time.
Posted by JK at 20:09