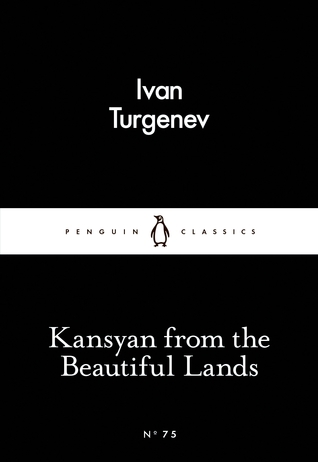 Kansyan from the Beautiful Lands by Ivan Turgenev

Turgenev's accounts of hunting in rural Russia, and the extraordinary characters he meets there.

I was absolutely desperate to start this one as I’ve never encountered a work of Russian literature that didn’t blow me away. Turgenev holds the honour of being the first Russian author to disappoint me.

To be fair, and perfectly honest, it was one of the better choices within the Little Black Classics range, despite its lack of impact. The two stories are taken from a collection of Turgenev’s short stories which recount his time hunting in rural Russia, and the various characters he met on his travels.

Using District Doctor to ease us in was an excellent move. The story tells of love, death, family, and lies, and does so in such a way to disorient the reader at a time where most of the characters are ablaze with confusion themselves. I relished this; the strange word choices, the behaviours, the utterly bizarre ending. And yet, upon the last word, I wondered what the point of it all was.

The titular short story left a lot to be desired. Although Turgenev skilfully displayed his writing skill with wonderful descriptions of nature, his plot wasn’t entirely compelling. I was baffled, frustrated, and, dare I say it, a bit bored.

I’m unsure whether this one’s failure is the fault of Turgenev for his poor plot outlines, or Penguin for their poor choice of stories. I do wonder whether these would make more sense within the collection they are taken from, yet Penguin haven’t compelled me to explore this any further.