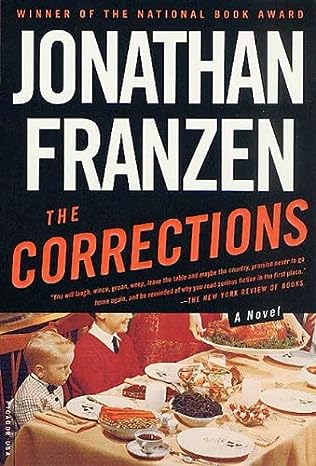 The Corrections by Jonathan Franzen

Enid Lambert is terribly, terribly anxious. Although she would never admit it to her neighbors or her three grown children, her husband, Alfred, is losing his grip on reality. Maybe it's the medication that Alfred takes for his Parkinson's disease, or maybe it's his negative attitude, but he spends his days brooding in the basement and committing shadowy, unspeakable acts. More and more often, he doesn't seem to understand a word Enid says.
Trouble is also brewing in the lives of Enid's children. Her older son, Gary, a banker in Philadelphia, has turned cruel and materialistic and is trying to force his parents out of their old house and into a tiny apartment. The middle child, Chip, has suddenly and for no good reason quit his exciting job as a professor at D------ College and moved to New York City, where he seems to be pursuing a "transgressive" lifestyle and writing some sort of screenplay. Meanwhile the baby of the family, Denise, has escaped her disastrous marriage only to pour her youth and beauty down the drain of an affair with a married man--or so Gary hints.
Enid, who loves to have fun, can still look forward to a final family Christmas and to the ten-day Nordic Pleasurelines Luxury Fall Color Cruise that she and Alfred are about to embark on. But even these few remaining joys are threatened by her husband's growing confusion and unsteadiness. As Alfred enters his final decline, the Lamberts must face the failures, secrets, and long-buried hurts that haunt them as a family if they are to make the corrections that each desperately needs.

This was a leap of faith for me. Almost seven hundred pages from an author I’d tried once before (The Discomfort Zone) and hated. I was going on the basis of the praise emblazoned on the cover, and the excellent reviews I’d read; both of which, I know from experience, are seriously untrustworthy.

Gloriously, wonderfully, magnificently, The Corrections turned out to be a labour of love. Franzen explores the Lambert family’s depths and disasters. He throws out entirely the idea of a plot, of anything remotely linear, in fact of anything resembling a structure whatsoever. It’s an analysis of relationships, health, and how we relate to one another.

Each of the Lamberts are deplorable in their own way. The parents exude a selfishness, a blatant refusal to accept change, a maddening yearning for how things used to be, and a firm belief in their own moral standpoints. The (grown up) kids are merely guilty of inheriting selfishness from these two, projecting it into adult life, and finding the consequences of such behaviours didn’t actually suit them. It was gorgeous.

As I learned more about the characters, and as I traversed with them each idiotic mistake they made, I was able to connect these with their childhood, and with the rest of the family. Each reaction, each predicament, could almost be predicted due to the vast level of knowledge I had on each of them - except one.

Albert, the Lambert patriarch, was an enigma. Battling with Parkinson’s and the onset of dementia, Franzen paints a devastating picture of the impact they had on Albert. The subtleties increasing until the family could no longer refuse to accept the situation was executed perfectly, and evoked a lot of emotion in me. It was very well done.

This isn’t a book for everyone. It needs investment, patience, and an expectation to encounter a study rather than a story. I found it so worthwhile, and I feel more energised to take more poorly informed leaps of faith in future.
Posted by JK at 19:57