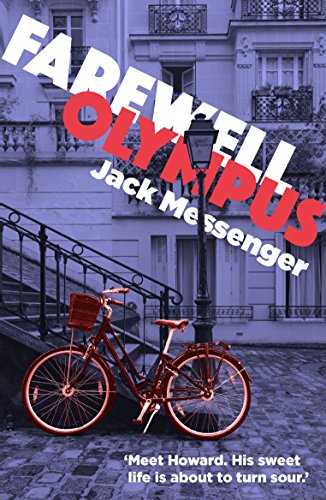 Howard has it all – love, Paris, prospects – until an unexpected guest plunges him into mystery and farce


When a patron of the arts named Serge loans him a luxurious penthouse apartment in central Paris, Howard can’t believe his luck. Then, disaster strikes, in the shape of Eugene, Howard’s half-brother and personal nemesis, who sows chaos and discord wherever he goes.
People are suddenly not what they seemed, and danger lurks in every restaurant. Serge himself is implicated in wrongdoing, while Giles, an Englishman abroad and seldom sober, knows more than he’s prepared to tell.
Can Howard and Eugene overcome their mutual antagonism long enough to survive? Should Howard forgive Eugene for being better looking? Will Eugene ever help him with the housework? Above all, will they ever agree about anything, particularly women?


Howard is living his best life in Paris - huge apartment, gorgeous girlfriend, alongside various other prospects - until his half-brother Eugene arrives and brings with him multitudes of chaos. Thus, Messenger plunges us into a riotous plot filled with espionage, kidnapping, almost-torture, and a host of mysteries to be solved - one of which is the nature of Eugene’s calamities.

The relationship between the two brothers is one of the most fascinating things here. Howard almost flees when he notices Eugene has arrived in Paris, and we are then encouraged to explore the reasons behind this. Dangerously close in age, each of them seem to subtly compete to be the better of the two, most which takes place through dialogue. Howard is thrown into crisis as his brother takes over his apartment, invokes bad men to follow him, and begins to seduce his girlfriend (a sore punch right on the masculinity).

Messenger’s prose is profound and yet engaging as he makes observations and drops bombshells into his plotlines. He peppers a lot of humour in exactly the right places, and has a skill in his writing which I’m at a loss to describe, but will use the word endearing for lack of a better. Howard’s mainly self-deprecating innermost thoughts were a particular mix of pity and giggles.

I found the mystery plotline to be slightly confusing, and I wasn’t entirely sure how to process the wrapping up of this. Nevertheless, the mechanisms worked well, and it was pleasing to see an eventual point of closure for the brothers.

A definite recommendation for a character study of siblings, Farewell Olympus was a special little gem highlighting just how we can find ourselves in situations we wouldn’t have the imagination to consider.
Posted by JK at 19:25