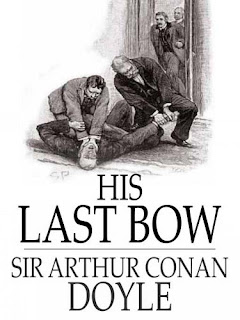 Sherlock Holmes's fearless chronicler Dr Watson once again opens his notebooks to bring to light eight further tales of some of the strangest and most fascinating cases to come before the enquiring mind of London's most famous detective.
These mysteries involve the disappearance of secret plans as well as of a lady of noble standing; the curious circumstances of Wisteria Lodge and of the Devil's Foot; as well as the story His Last Bow, the last outing of Holmes and Watson on the eve of the First World War.


I’ve been working my way through the entire Holmes collection for a number of years now, and I didn’t feel the stories contained in His Last Bow were as impressive as their previous contemporaries. I usually feel engaged with the detective’s powers of deduction, and overuse of the word singular, but here there was nothing which particularly struck me.

Perhaps the formula is just getting very old. A client approaches Holmes, Watson has his misgivings, the whole thing seems impossible to solve, and all of a sudden Holmes finds the tiniest of clues which has been overlooked, and the game is afoot. The only story here which didn’t follow this formula was the titular story, and yet it still didn’t quite hit the mark.

Still, they are consistently enjoyable, and there’s some good commentary here which forces the reader to question their own morals. More importantly, the normally stoic Holmes is seen to show some compassion, both towards his beloved Watson, to victims, and even occasionally to the odd perpetrator.

Although it seems the earlier tales are the golden eggs (as I felt a similar disappointment with The Valley of Fear the prior story in the collection), I only have The Case Book of Sherlock Holmes left as my final foray into the escapades of my favourite detective, so we’ll see whether or not that theory evolves.
Posted by JK at 20:30