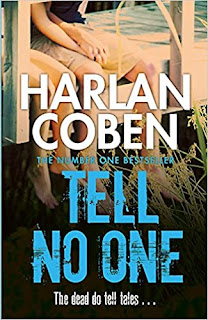 Tell No One by Harlan Coben

For Dr. David Beck, the loss was shattering. And every day for the past eight years, he has relived the horror of what happened. The gleaming lake. The pale moonlight. The piercing screams. The night his wife was taken. The last night he saw her alive.


Everyone tells him it's time to move on, to forget the past once and for all. But for David Beck, there can be no closure. A message has appeared on his computer, a phrase only he and his dead wife know. Suddenly Beck is taunted with the impossible- that somewhere, somehow, Elizabeth is alive.
Beck has been warned to tell no one. And he doesn't. Instead, he runs from the people he trusts the most, plunging headlong into a search for the shadowy figure whose messages hold out a desperate hope.
But already Beck is being hunted down. He's headed straight into the heart of a dark and deadly secret- and someone intends to stop him before he gets there.

I like nice wee thrillers that help disengage my brain from real life for a while. I particularly like outlandish, impossible plots which seem unfathomable to a everyman’s brain. Tell No One was such a novel.

Coben feeds us information piecemeal until we’re drowning in characters, information, and possibilities. This doesn’t make anything confusing, it merely adds to the intrigue and the list of plausible explanations. There are huge twists and turns, some of which I guessed, and none of which particularly shocked me. What made Tell No One a jewel was the pace, the engagement, and the captivation. I was desperate for more.

Where Coben’s skill lies in making us want to read on, this is in no way a literary sensation. I was annoyed at his characters. Some were caricatures, which I could take or leave, but some were excellent and demanded more attention and backstory which they were denied. Most importantly, the characters our main focus was on, the married couple, were cast as having such an unbelievable perfect relationship. Together since they were kids, carving their initials on trees, returning to the same tree every year to kiss and add another tally mark. There were no black marks within their relationship, and although I understand this was needed to move the plot along,  I wasn’t able to suspend my disbelief quite enough to buy it.

As I’ve said, it’s a nice wee thriller. I needed something to help me escape, to help me pass a few hours, and to place my brain somewhere different, and it worked. I was addicted, I was in. I just wasn’t thrown off my feet.
Posted by JK at 21:01