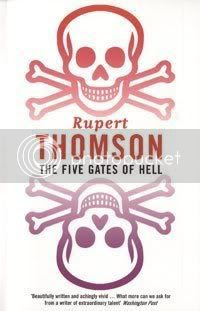 The Five Gates of Hell by Rupert Thomson

Moon Beach--place of the dead--where once a year the city observes the Day of the Dead. During one such celebration, two young men from different worlds become the fascinated servants of an entrepreneur of death, whose private passions are intimately entwined with his vocation.

I really enjoyed this in a strange sort of way. It was completely different, and almost a breath of fresh air.

Thomson's use of language was gorgeous. It was beautifully written - so descriptive, so vivid, and so full of wonderful imagery that I felt myself getting more emotionally involved than I usually do.

The story was set in what seemed like an alternative city with strange religious views on death and funerals, which in turn bred strange ceremonies and annual events. The main industry here was funerals, oddly enough.

My favourite things were mostly the the complex plot and the subtle intertwining of characters that Thomson had infused into the whole crazy idea. It began as a coming-of-age novel, then slowly evolved into something a bit more sinister, sexual and disturbing.

One thing that bothers me, though, is that it's almost impossible to place this book into a genre. It's a sort-of horror/thriller, but not really. It's kind-of crime, but maybe not. There's also nods towards religion with almost a touch of irony, but not quite.

I've noted down Rupert Thomson's other novels to have a look at. If he has written the rest of them as beautifully as this one, then I am definitely in for a treat.

It's only the second book of the year, but it's definitely my favourite so far!