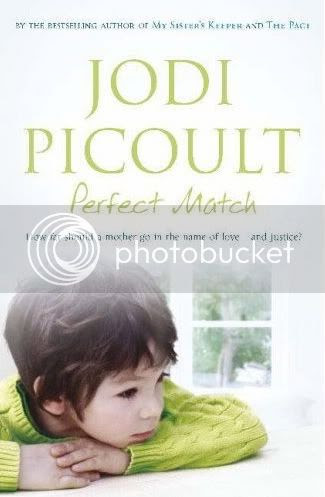 Assistant DA Nina Frost prosecutes child molesters, and in the course of her everyday work she endures the frustration of seeing too many criminals slip through the system and walk free. So when she realises that her son Nathaniel has been sexually abused and is so traumatised that he has stopped speaking she takes justice into her own hands.

Nina Frost may have killed the man who hurt her son, but has she destroyed her family in the process? And whatever happened to innocent until proven guilty?

I was slightly indifferent about reading this as I'm not a huge fan of Jodi Picoult. I find her books to be quite simple, straight-forward and all following the same basic pattern. Despite her best efforts to make them as complex and topsy-turvy as possible, it's usually quite easy to divine what's going to happen next. There's always some sort of moral dilemma that the main protagonist has to work their way out of. This was the case with this effort as well, but I had forgotten Picoult's ability to draw you in as a reader and render the book impossible to put down.

I couldn't sympathise for the main character, Nina, at all. I think this may be due to the fact that I'm not a mother myself, and I can't relate to her feelings during her ordeal in any way whatsoever. Having said that, I didn't actually like her as a person and I don't feel she represented human nature in a way that would make the reader her ally. I certainly wasn't cheering for her, I thought she was an evil bitch.

There were also a few other seemingly aimless characters introduced to us throughout the plot, and I had no interest whatsoever in their lives, either. And it's a good job I didn't, because most of these mini life-stories didn't come to any sort of satisfactory conclusion, namely Quentin Brown, the prosecutor.

I do like, however, Picoult's ability to show us things from all of the main character's point of view, rather than just from the main character's eyes. I particularly enjoyed Nathaniel's rudimentary commentary on events, I thought that was original and required in a story such as this.

I, unfortunately, won't be immediately seeking out another Jodi Picoult book to read anytime soon. I've read others in the past and her pattern of crime, court, jury's decision is becoming tiring. I also felt that in this particular novel, she was attempting to make her language as poignant as she possibly could, which came across as a bit cheap and cheesy to me.

It was an entertaining page-turner, I'd recommend it as a casual read, but it's no good for substance-seekers like myself, I'm afraid.