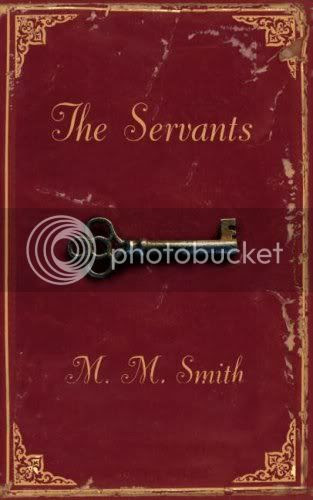 The Servants by M. M. Smith

Eleven-year-old Mark is bored. He spends his days on the Brighton sea-front, practicing on his skate-board. His mother is too ill to leave the house, and his stepfather is determined that Mark shouldn't disturb her. So when the old lady who lives in the flat downstairs introduces him to rock cakes and offers to show him a secret, he's happy to indulge her. The old lady takes a large, old-fashioned key and leads Mark down a dusty corridor to a heavy door. Beyond the door is a world completely alien to Mark's understanding. For behind the old lady's tiny apartment, the house's original servants' quarters are still entirely intact, although derelict. Mark finds himself strangely drawn to this window onto the past, and when, the next time he visits, the old lady falls asleep, he steals the key and goes to visit the servants' quarters alone. And suddenly Mark's life takes a bizarre turn, as the past seems to collide with the present, dreams invade reality and truths become apparent to this hitherto unperceiving boy.

I didn't realise when I picked this up that it was actually a young adult novel. I was expecting a ghost story with a bit more depth, and didn't really enjoy the book. I wouldn't recommend it to adults, but perhaps for the intended audience this book would be okay.

I was disappointed as I was expecting (and was in the mood for) a gripping ghost story, but instead was presented with a coming-of-age novel. I could have dealt with that had I not run into a severe lack of character development. The servants, whom the book is named after, rarely featured, and because of this I felt extremely frustrated once I had finished the novel as there were so many things that had gone unanswered.

One thing I loved about the book was the pandemonium in the servant's quarters mirroring the mother's developing cancer, but the book was less about the ghosts of servants past and more about how much the main character hated his stepfather.

I don't like saying this, but I feel like this was a waste of time for me. The plot had so much going for it in the beginning, but in the end didn't deliver. A shame.