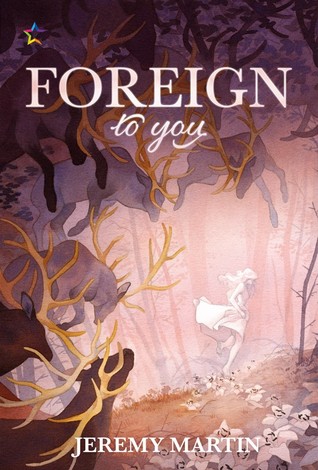 Foreign to You by Jeremy Martin

The harmony between humans and fianna, a species of shape-shifting deer, begins to wither as racial tensions and deeply rooted resentment turns violent.


Ruthless hunter Finn Hail and prophesied liberator Adelaide may be heroes to their own species, but they are enemies to each other. With war on the horizon, the reluctant pair must team up to find the most elusive of prey: the god of the Forest.
As enemies press in from all sides, true intentions begin to show. For Finn to save the boy he cares for most, he might need to aim his gun at the very god he seeks. And Adelaide, with her festering hatred for mankind, will have to determine if peace holds true salvation for her people.


I really enjoyed the world Jeremy Martin presented to me here. Luscious greenery surrounds a small town, masking its inhabitants from the creatures in the forest. These creatures, in the form of deer, annually transform into humans and come to join the town’s residents for a festival-type celebration. Seems wholesome, yeah? No.

There are severe racial tensions between the humans and the deer-human hybrids - who are named fianna - within Martin’s world. He articulates this racism well, showing us the discrimination, the hate, the utter injustice and lack of reason found in mob mentality. It maddened me, as commentary on racism always maddens me, and Martin had me from the beginning.

The saltiness towards the fianna is not helped along by the fact that some of them experience problems when transforming, often finding themselves in a form halfway between deer and human. A terrifying sight, only made more frightening by them losing all rational thought whilst in this form, rampaging through the forest and town to terrorise and slash up anything they can find, human or otherwise. The town hunters work upon their strict shoot to kill orders when they come across a feral.

What I loved most here was a shift from the standard fantasy trope of boy meets girl. Boy certainly does meet girl, and although they maintain a complex relationship, there is never any notion of love, because boy loves another boy. Although this was written in very slight queer subtext, I welcomed it all the same, despite not particularly welcoming Martin’s desire to break my heart shortly after said queer subtext was established!

The plot is super fast-paced and there’s a load of action scenes, which I found confusing in places. Although written in multiple voice narrative, there wasn’t a great deal of differentiation between the voices, and often it became unclear who was narrating. Having said that, the prose itself was as flowery as the forest, and Martin truly wrote in a style which really reinforced his setting; descriptions of landscape, characters, and homes all prescribed to an other-worldly feel which felt gorgeous.

Finally, I was really pleased with the finale. I don’t tend to enjoy novels which tie things up into a little bow; it’s unrealistic. Martin delivers his final punch in an odd, ethereal way, leaving us guessing at a multitude of questions unanswered. In some ways I can see a sequel happening; in other ways I can’t see where we’d go from here. He’s left so many questions in my mind.

Tell us more about the fianna, please, Jeremy. I’ll bring snacks.
Posted by JK at 21:27