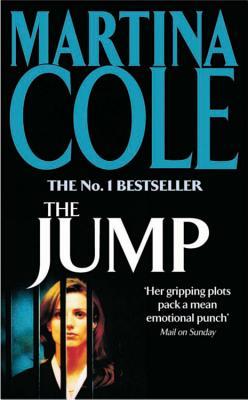 The Jump by Martina Cole

Donna Brunos worships her husband and is devastated when he is jailed for armed robbery. Georgio swears he's been set up and persuades Donna to help him escape.
Implementing 'the jump' takes Donna into a twilight world she never believed existed - a world of brutal sex and casual violence. Finally, she is confronted by a series of shattering revelations that threaten not only everything she believes in but also, ultimately, her own life.

I do love a bit of trashy crime fiction to break up my reading list. Usually fast-paced, and peppered with mysteries and whodunnits, I tend to speed through them on an unerring quest to the end. Having never read any of Cole’s work before, I picked this up expecting all of the above. It’s taken me ten days of apathy and groaning to get through; I almost gave up the ghost midway, and I wish I had.

Our heroine, Donna, is rich as fuck and married to a beautiful wealthy man. He has multiple businesses, and Donna has no idea what they consist of. When he’s arrested and jailed for armed robbery, she is convinced he’s innocent. When he asks her to organise his escape from prison, she nods like a good little girl and gets to work summoning bad boys and having damsel in distress fainting fits at her subsequent discoveries about her husband’s secret life.

This book is almost seven hundred pages long, and most of these are filled with Donna’s angst and mourning. She is so blind to her husband’s obvious villainy, and we’re reminded of this constantly. She’s a passive, simpering idiot, and can’t even bear hearing anyone swear, which, in a book set in London’s seedy underworld, gets very tiresome very quickly. We’re supposed to see her transformation from dutiful wife to bad ass bitch, but I could not abide her in either of these forms.

The plot drags on mercilessly. Cole seems to have no talent for hooking a chapter cliffhanger, nor adeptly setting up a mystery. Amidst action, she likes to have her characters pontificate over their lives in incredibly dull inner monologues which last so long that we’re jarred when the plot starts back up again. Dialogue is rife with cliche, and Cole is obviously desperate to paint her characters as hard as nails.

And the characters! Holy fuck, how many characters does one woman need? Each criminal involved in executing the jump was described in detail - their pasts, their families, their crimes, their motivations and desires. I don’t care to count them, but they were fucking immeasurable and entirely superfluous. I couldn’t remember them all as they bled into each other, all just big bad guys who’d done things and been through some shit. Give me strength.

Finally, blessedly, the plot is wrapped up in what seems like a incredibly rushed and predictable finale. Of course, I welcomed this swift finish, but couldn’t help feeling some of the previous shite could have been condensed to make way for a more fulfilling end.

My final book of the year, and I’m blisteringly thankful to be sending Martina packing.