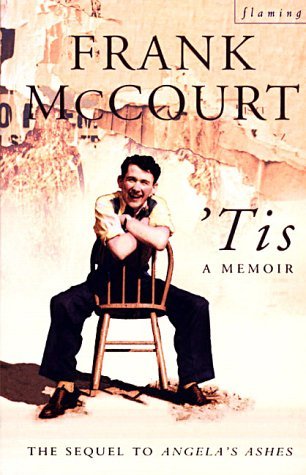 ‘Tis: a Memoir by Frank McCourt

The sequel to Frank McCourt's memoir of his Irish Catholic boyhood, Angela's Ashes, picks up the story in October 1949, upon his arrival in America. Though he was born in New York, the family had returned to Ireland due to poor prospects in the United States. Now back on American soil, this awkward 19-year-old, with his "pimply face, sore eyes, and bad teeth," has little in common with the healthy, self-assured college students he sees on the subway and dreams of joining in the classroom.

I picked this up immediately after Angela’s Ashes as I wasn’t yet ready to end my relationship with Frank. He had crossed the Atlantic, fled a life of poverty, and I wanted to see him thrive, wanted to see the underdog win.

The contrast to life in Ireland is clear, but the heartbreak is that he doesn’t win. He leaves the hardships of Limerick only to meet new struggles in New York. He falls into drinking habits which mirror his father’s, he struggles to find a job, to fit into American social customs, he longs to become educated yet feels inadequate to the other students when he finally achieves a place. He’s self-deprecating, a fish out of water, and lost.

All of these factors contributed to a sharp decline in my loving feelings for Frank. He becomes bitter about his childhood, resents his family for either their past struggles or present success, creates tension between himself and others, all due to his desire to be better, to be a class above. Although all of these feelings are natural and understandable, there’s nothing redeeming about Frank in his words, and in his blame.

Although older here, Frank’s narrative is still styled in a similar way of the naïve boy living in Limerick. This makes him sound mostly idiotic rather than endearing, and was an irritation throughout the pages. The man sees horrendous things, experiences life-changing things, yet he still describes them as though he’s a young boy. There was something not quite right about this, and I almost felt as though he was trying to capitalise on the success of Angela’s Ashes, rather than giving a true, mature account.

It’s a truthful and bleak sequel, though I was desperately disengaged by the narrative, non-specific vignettes, and a general distaste for Frank’s choices. Where Angela’s Ashes was a tribute to a mother who did everything she could so her children could survive, with love always, ’Tis is just an account of how each of them vilified her for it.
Posted by JK at 20:31