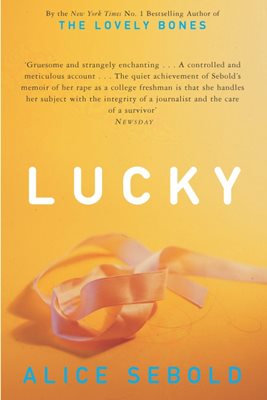 In a memoir hailed for its searing candor and wit, Alice Sebold reveals how her life was utterly transformed when, as an eighteen-year-old college freshman, she was brutally raped and beaten in a park near campus. What propels this chronicle of her recovery is Sebold's indomitable spirit - as she struggles for understanding ("After telling the hard facts to anyone, from lover to friend, I have changed in their eyes"); as her dazed family and friends sometimes bungle their efforts to provide comfort and support; and as, ultimately, she triumphs, managing through grit and coincidence to help secure her attacker's arrest and conviction. In a narrative by turns disturbing, thrilling, and inspiring, Alice Sebold illuminates the experience of trauma victims even as she imparts wisdom profoundly hard-won: "You save yourself or you remain unsaved."

The very title of this memoir speaks volumes. Sebold pointedly shows us people telling her she was lucky it wasn’t worse, lucky the police believed her, lucky she wasn’t wearing anything too revealing. Lucky is one of my most hated words, yet it’s flipped on its head here, and luck hasn’t a thing to do with it.

It’s an utterly bleak and honest account of Sebold’s rape and the aftermath; her attempts to rebuild, and to heal, tempered in difficult words as the shadow of the crime is never far from her back.

The words are raw and simplistic; not overly emotional, and yet stabbing all the same. Sebold depicts everything from the assault itself, to the reactions and coping mechanisms of her friends and family. Set so starkly, it’s harrowing and gut-wrenching to see the varying ways the people around her try to come to terms with what’s happened to her, and, ironically, make things worse merely by trying to help.

No words I could put down here could describe how naked this account this, nor could I convey how important a read this is, not only for women, for survivors, or otherwise, but all of us. My words on this count for nothing, so I’ll close with some of Sebold’s:

“Since then, I've always thought that under rape in the dictionary it should tell the truth. It is not just forcible intercourse; rape means to inhabit and destroy everything.”