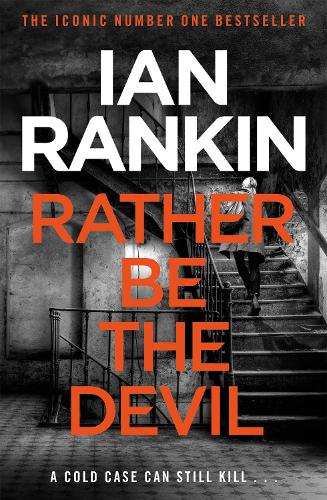 Rather Be the Devil by Ian Rankin

Some cases never leave you.
For John Rebus, forty years may have passed, but the death of beautiful, promiscuous Maria Turquand still preys on his mind. Murdered in her hotel room on the night a famous rock star and his entourage were staying there, Maria's killer has never been found.
Meanwhile, the dark heart of Edinburgh remains up for grabs. A young pretender, Darryl Christie, may have staked his claim, but a vicious attack leaves him weakened and vulnerable, and an inquiry into a major money laundering scheme threatens his position. Has old-time crime boss Big Ger Cafferty really given up the ghost, or is he biding his time until Edinburgh is once more ripe for the picking?

This is John Rebus’s 21st entry into the fray, and yet my first alongside him. I’m not one to start something unless it’s from the absolute beginning, and I’m still baffled as to why I decided to kick off with what is effectively the final instalment where Rebus is actually retired. Yet here we are.

And what a novel. I couldn’t get enough, couldn’t inhale the words quickly enough. Rankin creates a tension throughout each page, no matter whether we’re in the midst of guns and hammers, or simply sitting in Rebus’s flat pondering the details of the case. There’s something addictive about his writing which makes ingesting as much of the story as possible the highest priority.

My first time meeting Rebus was wonderful. This is the type of character who speaks to me; someone who sees rules and restrictions simply as barriers to get around, someone who is at the far extreme of resilient, and someone who has a glorious tongue for insulting people. “Is your head made out of fucking mince” was a particular favourite.

Although this is similar to most crime novels in that to give an informative review would be to give away the plot (something I’m against entirely), there is more than one crime to be solved here, each of them interlinking. As soon as one was committed and we felt we were getting something, another was thrown into the ring for us to mull over - every single one a link in a chain of destruction, each one as delectable as the next.

I read Rankin’s first novel The Flood a couple of years back, and now have jumped to his most recent. Perhaps an idiotic move, perhaps not, but I’m now desperate to retrace my steps and go back to Rebus’s beginnings. We’ve got the makings of a fangirl here.