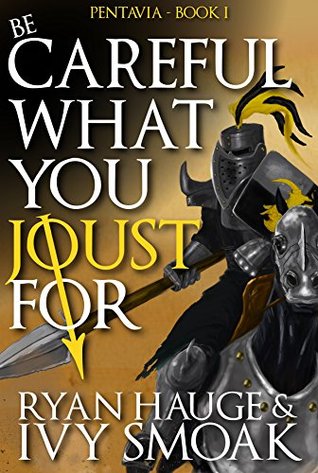 The fiercest knights in the realm are coming together to compete in the Joust for Arwin's Lance, a tournament that will divide even the closest alliances. The winner alone will have the power to start or prevent a war from unfolding across the peaceful lands of Pentavia.
House Hornbolt, a prominent family that desires peace above all else, is hosting the tournament. The Hornbolt’s have always been strict followers of tradition. The first born son wears the armor of a knight. The second takes the priestly Oath of Arwin. And the daughters get married off to the most eligible suitors.
The eldest son is the favorite to win the tournament. But the rest of the Hornbolts aren't as eager to follow the paths laid out for them. What if the second born wants to be a knight too? And what if the eldest daughter just gave her heart to a common thief?
Customs are meant to be broken. But that’s not all that threatens to shatter House Hornbolt, not when a secret deeper than the late king's grave is unearthed right before the joust.
The fate of Pentavia hangs in the balance as war becomes imminent. And the scales are about to tip.
One wrong move and everything could fall to pieces.


I was delighted to receive an Advanced Reviewer Copy of this novel, particularly after my venture earlier this year into the Game of Thrones series; I needed some more fantasy in my life, and Hauge and Smoak definitely delivered.

It’s an interesting mediaeval plot, centred around an upcoming tournament, of which the winner will have the power to decide whether or not to incite war throughout the kingdom. All of this is narrated using (a much-loved technique of mine) multiple-voice narrative, giving us a rounded view of each of the characters’ desires and motivations. It worked well here in providing descriptions of the current state of affairs within the kingdom, and to introduce us to the main players within the plot.

The world Hauge and Smoak have created is brilliantly executed, and seems to have a real depth to it, similar to Westeros. Although we didn’t travel far in Be Careful What You Joust For, far-off lands and different customs were referred to with an implication we would see more of them later in the series.

I did have a couple of problems with this novel, most of which didn’t have much of an impact on the novel (and which have been covered off already by a number of reviewers), but there’s one which I feel I have to mention – the way in which Princess Navya was described. Although not a pretty picture in comparison to the duke’s daughter, this would have been duly received without condescending remarks about her hairy arms, and the almost constant reports of her being “a monster”. The harsh repetitiveness of this type of slander didn’t sit well with me; why can’t a woman with hairy arms be beautiful? Why does natural hair growth immediately turn a woman into a monster? The implication that fair hair and a light complexion should be a prince’s ultimate desire was disappointing.

There is a lot going on here that we didn’t manage to visit within the first novel. I feel there’s whole world of intrigue out there in Pentavia that I want to dig my claws into. Although it felt like a mere toe in the water for the Pentavia series, with an infuriatingly frustrating cliffhanger finale, I would be delighted to read the second in the series. I felt the same appetite for knowledge I did with GoT, and I am desperate to learn more of the characters’ fates.