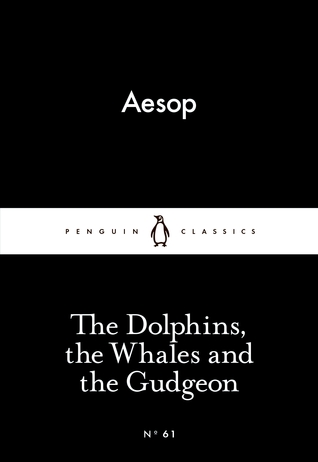 The Dolphins, the Whales and the Gudgeon by Aesop

Aesop's animal fables are some of the earliest stories ever told, thought to have been composed by a slave in Greek antiquity and giving glimpses of a world that is harsh, pitiless and yet also eerily familiar.


It’s enchanting to think how Aesop’s fables, said to be written in the sixth century, resonate so well today. Despite the fables here being written mainly from the point of view of animals, it’s clear to see that people never change.

Little Black Classics have given us a short fable on each page, with a short description of the moral, or lesson learned, after each of them. Although I had initially welcomed these explanations, I feel on reflection they made things too easy - I would have preferred to have mulled the fables over and considered their meanings for myself. The way they were set out here allowed me to plough through them, making this a very quick read.

Despite the meagre length of these tales, they all had resonance and meaning on the way we live our lives. My favourite, by far, was The Bat, the Bramble, and the Gull, which spoke to us about holding on to things. I found the behaviour of the bramble to be melancholically beautiful; a strange way to feel about a plant, indeed.

Another excellent dip into otherwise uncharted territory for me; bring me more Aesop, please.