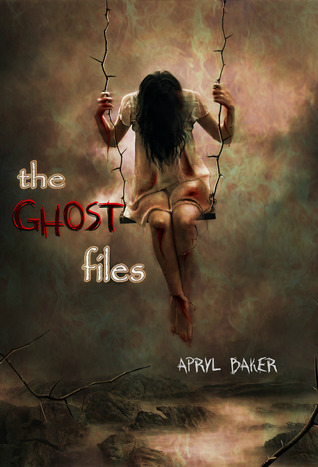 The Ghost Files by Apryl Baker

Sixteen year old Mattie Hathaway has been able to see ghosts since she was five years old. No way does she want anyone to know she can talk to spooks.
Normally, she just ignores the ghosts and they go away. That is until she see’s the ghost of her foster sister, Sally.
Everyone thinks Sally’s just another runaway, but Mattie knows the truth—she’s dead. Murdered. Mattie feels like she has to help Sally, but she can’t do it alone. Against her better judgment, she teams up with a young policeman, Officer Dan, and together they set out to discover the real truth behind Sally’s disappearance.
Only to find out she’s dealing with a much bigger problem, a serial killer, and she may be the next victim.
Will Mattie be able to find out the truth before the killer finds her?

Mattie is sixteen and sees dead people. Her main response to this is to simply ignore them until they go away, before circumstances dictate interaction and she’s propelled into new spooky calamities.

The plot ticks along well, but I felt, considering Mattie’s circumstances, that there seemed to be a lack of tension and intrigue. She knows there are people who need saved from imminent death, but instead spends a lot of time hanging out at the diner and pontificating over the variety of boys she has a crush on. Her motivations were strange, and wrong.

I understood I was being given a teenage female protagonist, but she felt like a caricature of herself for the most part. Both her inner and outer dialogue were peppered with insipid turns of phrase, ones which would probably come up if you surveyed a bunch of middle-aged white dudes and asked them how they thought teenage girls spoke. She also told me frequently about the walls she put up, how strong she was, and how foster kids were a different breed from others. She told me these things, but rarely showed me. It was poor characterisation, and it really affected my ability to engage and sympathise with Mattie.

For a horror, there was a real lack of suspense, no notable twists, and things began to take some very convenient turns in order to tie the story up to its ending.

I sound like I hated this book; I didn’t. But I have noted down the main things which spring to mind on reflection, so I’ll leave them as they are. More nuanced characters, a plot with some more complexity, and less use of the word fudgepops would have been all that was needed to make this excellent.
Posted by JK at 21:38