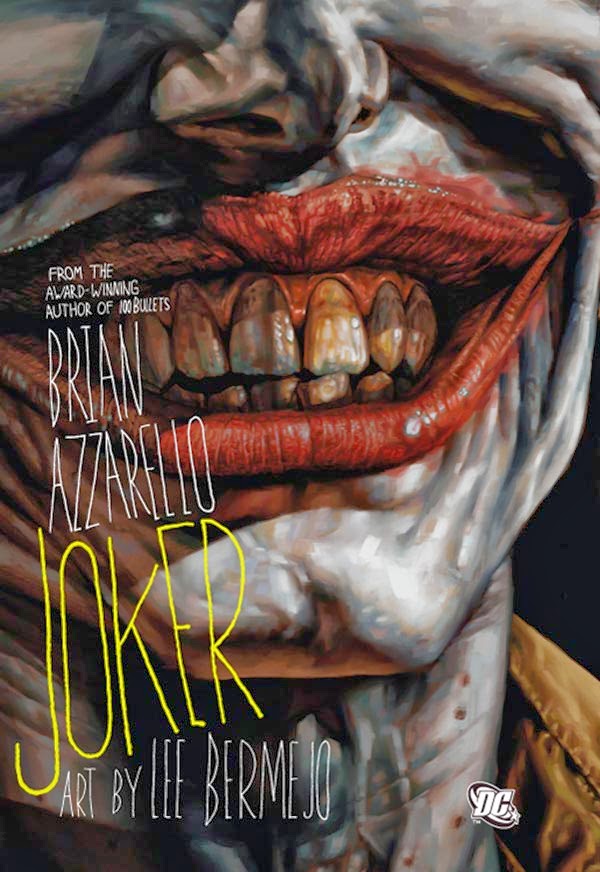 The Joker has been mysteriously released from Arkham Asylum, and he's none to happy about what's happened to his Gotham City rackets while he's been "away." What follows is a harrowing night of revenge, murder and manic crime as only the Joker can deliver it, as he brutally takes back his stolen assets from The Penguin, The Riddler, Two-Face, Killer Croc and others.

The Joker is released from Arkham for reasons we are never given. This immediately hints at the fragility of the Joker's sanity, and although he seems sober and sane in places, he really flips the lid in others. All the while the unanswered question is broiling in the back of the reader's mind - why the hell did they let him out?

He goes on to visit all of his old comrades; we get to meet Two-Face, the Penguin, Killer Croc, and the Riddler; and it's just wonderful to see them depicted by Lee Bermejo. From Two-Face's burns, the Penguin's moist face, Croc's weird skin condition, and the Riddler's club foot, the reader is allowed a flash of recognition before being hit with the realisation that the Joker owns all of these villains.

This isn't plot driven in the slightest, and more an in-depth look into the Joker's character, He's portrayed from a more human angle than the one we usually see him from, and somehow this makes him all the more terrifying. Whether sobbing into Harley's lap with drugs strewn all over the room (a true slip of the mask), or having a moment of quiet contemplation before launching into another riotous rampage, our perceptions of the Joker are skewed entirely. He is likeable at times, and at others you are forced to look at yourself and wonder why you warmed to him in the first place. Are you warped too?

The art just blew me away. It was so compelling, and the panels were laid out perfectly to engage the reader and create tension, climax, and dread. The colouring was deep, and pretty dark, which worked amazingly well, creating a real picture of terror to get caught up in.

I'm not sure the Joker's psyche is one that can be penetrated entirely; probably only scratched away at slowly. This is a wonderful glimpse into his mind, however, and a wonderful attempt at allowing us to understand him. The noir atmosphere is absolutely addictive, and the gore was a draw for me too.
Posted by JK at 23:01