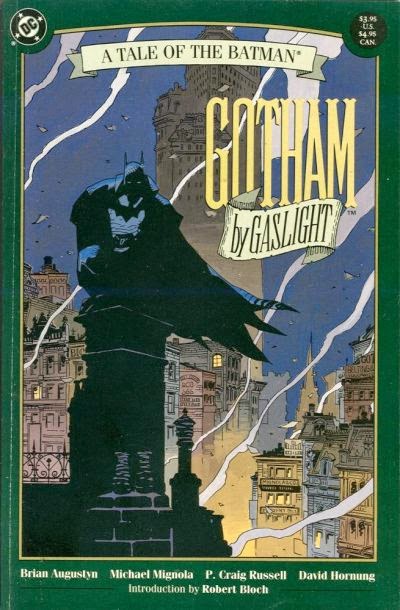 What would the Gotham City of 100 years ago have been like? In an age of mystery and superstition, how would the people of Gotham react to a weird creature of the night, a bat-garbed vigilante feared by the guilty and the innocent alike? Some would live in terror. Others would rest easier. Only one man would take no notice at all...a man with other matters to attend to. His name? No one knows for sure. Most people know him only as Jack. Jack the Ripper.


The idea of Batman in the Victorian era is absolutely delectable to me. All of my favourite classic novels are set in this era, and seeing the streets of Gotham so beautifully illustrated to reflect the architecture, costume, and general feel of that time was absolutely compelling. The colours were dark and moody to suit the tone, giving a real sense of doom, and the Gotham streets just looked so terrifying as they held Jack the Ripper somewhere in their folds.

It would've been great to see some of the other well-known Batman characters in their Victorian form. A gaslight Selina Kyle or Cobblepott would have been brilliant, but it wasn't to be. I'd also have loved to have seen more of Arkham - 19th century asylums are fascinating places, so more of this would have endeared me massively.

The steampunk element here isn't as prevalent as other reviews may have you believe. I would've liked more industrial gadgets, something clockwork, perhaps. Without his gadgets, however, Batman is totally charming, relying on thousands of scraps of paper, and writing "WHO?! WHY?!" all over the walls in order to solve crimes.

I'd have loved for this to be a bit longer and more in-depth. The idea of Batman facing up to Jack to Ripper feels like a battle of giants, and more could've been done with this. Overall, though, I absolutely loved it, and the Victorian setting made it for me entirely.