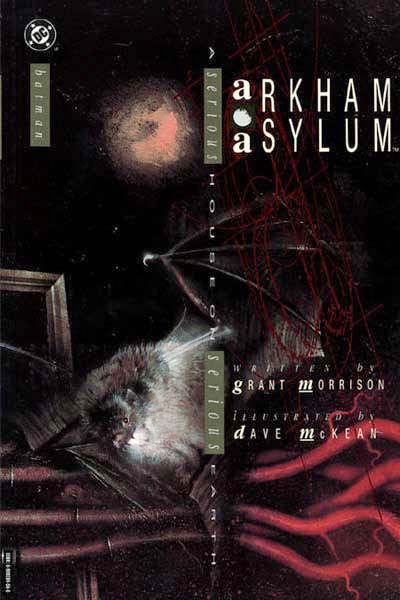 The inmates of Arkham Asylum have taken over Gotham's detention center for the criminally insane on April Fools Day, demanding Batman in exchange for their hostages. Accepting their demented challenge, Batman is forced to live and endure the personal hells of his sworn enemies in order to save the innocents and retake the prison. During his run through this absurd gauntlet, the Dark Knight's own sanity is placed in jeopardy.

This absolutely terrified me, and I wasn't expecting it. I had flicked through the pages before, noting that the artwork was very different from what I was used to; more disjointed and abstract. I had no idea that this technique, along with the pace and tone of the characters' dialogue, would scare me out of my absolute wits.

Two different storylines run alongside each other here; one taking place in the 1920s, with Amadeus Arkham trying to cope with the death of his insane mother, and turning her house into the asylum that stands today; the other a present day tale, where the inmates take over the institution and ask for Batman to join them as ransom for the hostages. Batman then endures an hour of hell as he traverses the asylum, coming into contact with many of the psychologically questionable criminals he's incarcerated there. Towards the end, the stories intertwine, with the narrative taking place in the 1920s, but with the panels reflecting Batman's experiences. This was a great technique, showing the power of Arkham spanning the years.

The artwork was fantastic, with Arkham set as the sinister and brooding place it's always been. The drawings are by no means typically comic book; instead, they're entirely surreal, with dream-like qualities attached. McKean's art itself could conjure nightmares; it was so eerie and forbidding.

I liked the idea that Batman perhaps belonged in Arkham as he wasn't quite sane himself. Let's face it, wearing a bat costume and prancing around at night fighting crime isn't really within the realms of sanity. There was a hint of each of the villains he encountered representing one of his fears, and huge load of Freudian hints, such as matricide and the structural theory of the mind being symbolised by the structure of Arkham itself. I particularly enjoyed seeing all of the villains in there, and the effect they had on Batman and his inherent fears as he ran into them one at a time.

Incredibly frightening and wonderful all at once.

Arkham Asylum's always been one of those ones I have a love/hate relationship with. Much as I want it to be the best thing ever, it always just leaves me feeling that it's highly over-rated.

While the art is fantastic and terrifying, the book is let down by clunky, unnatural dialogue and hammy storytelling. If you ever see footage of Grant Morrison talking about writing it he clearly thinks he's crafted some immortal masterpiece and...I just don't agree...